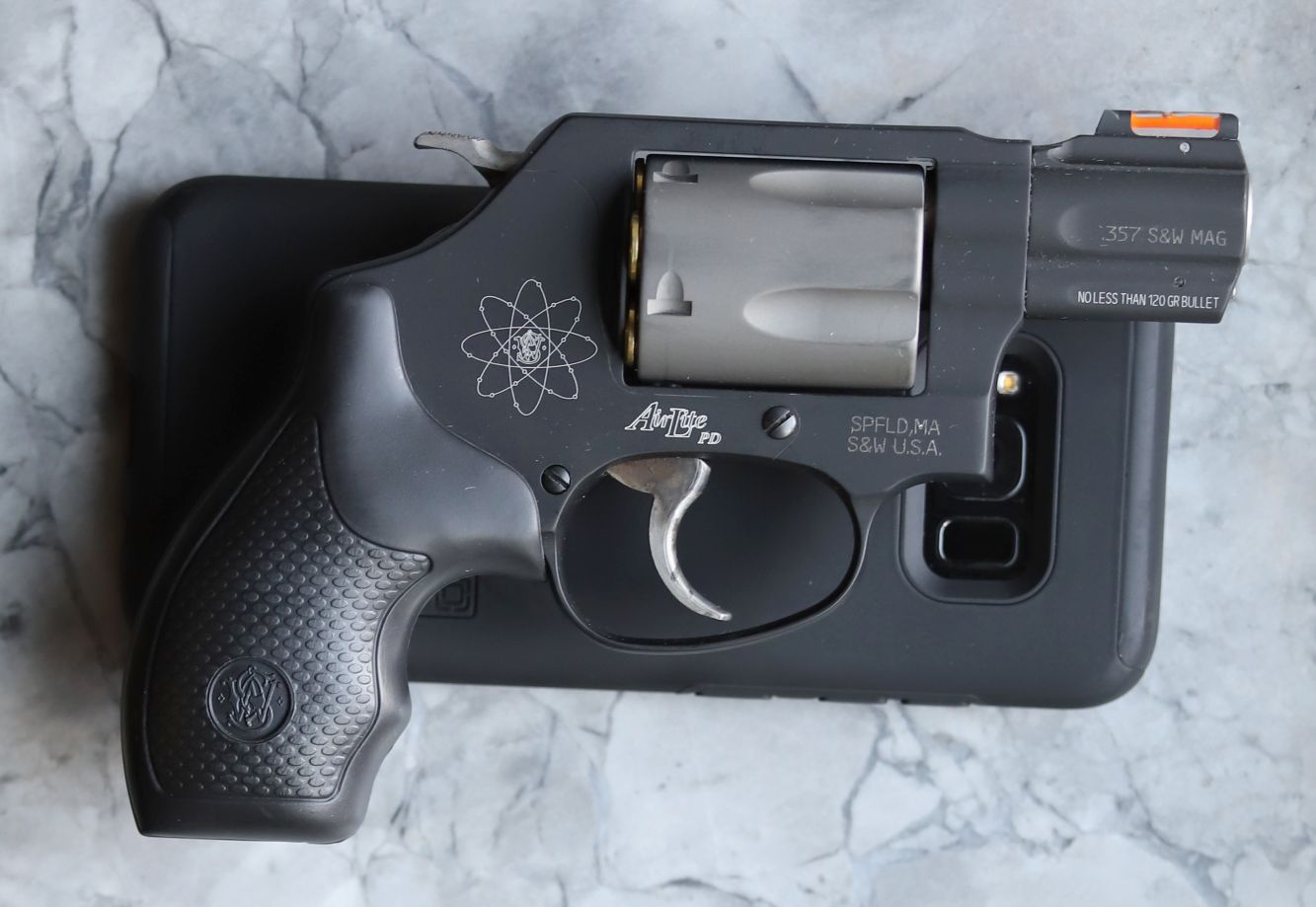 The very first time I held a Smith and Wesson 360pd in my hand, I knew that I wanted one.  That was a few years ago at an NRA convention if I recall correctly. The Scandium frame and the Titanium cylinder come together to create something very special.  The barrel, hammer, trigger, cylinder release, and a few internal parts are about the only iron you will find on this gun.

It all adds up to a serious case of cognitive dissonance.  It is very hard to pick up an empty 360PD and think of it chambering .357 rounds.  I've held toy guns that are heavier. 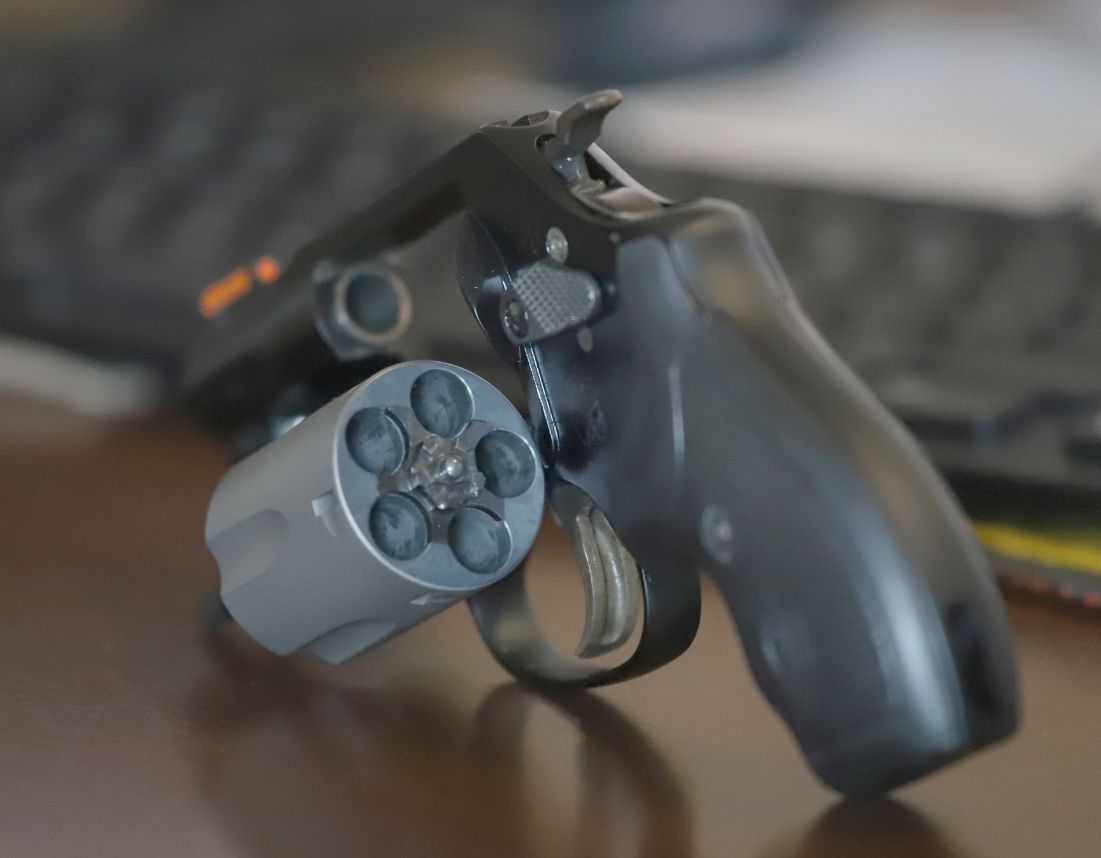 Today I own two of them, and I haven't looked back.  The 360PD weighs between 11 and 12 ounces.  I weighed mine for this article and it came in at 11.6 ounces, empty.  A full 5 cylinder load takes it over 14 ounces, and putting it in a small leather holster increases the total weight to just over 1 pound.    It is a featherweight by all measurements.  A plastic holster and some light .38 loads might save you an ounce or two, but it doesn't really matter.  The 360PD will happily shoot hot .357 loads all day long, but your hands may ask for a break.  Ballistic tests show that the very short 1.875 inch barrel doesn't really make full use of the .357 round.  Muzzle velocities are increased marginally over the much more economical .38+p rounds.  There is one distinct advantage to shooting .357 out of this defense weapon though, the noise, flash, and concussion.  Even if you miss your attacker, he or she will be stunned and disoriented, as the explosion out of the muzzle of this gun is truly spectacular.  The side of the barrel shows a warning not to shoot bullets with a weight under 120gr.  This may seem odd to the casual shooter, but research reveals that the powder has not stopped burning despite the projectile being long-gone with anything lighter than that.  This will cause increased wear and over time will damage the firearm.

WARNING: DO NOT USE MAGNUM® LOADINGS

WITH BULLET WEIGHTS OF LESS THAN 120 GR.

THIS WILL REDUCE THE POSSIBILITY OF

Don't worry about that though, you'll be happy to shoot .38s at the range to save money, your senses, and to learn the firearm.  Don't be afaid of the .357s though, it's a blast, seriously.  Just make sure you are gripping it well, and keep your thumbs away from the aggressively textured cylinder-release on the left side of the gun.  The gun doesn't move far, but because of how light it is, it does move quickly.  That cylinder release is like a mini-mace, keep your thumbs clear of it.

This short video should show the big difference between .357 and a few .38 loads in a bit of a mixed bag of a cylinder.

That is one of the things I love about the 360PD, I can grab whatever ammo I have (as long as it isn't a .357 lighter than 120gr, so I never buy those) in my wheel gun ammo bucket, and throw it in the gun.

Some in the tacti-cool crowd will question why anyone would want such a small, concealment revolver with a hammer, as it will be more likely to snag when drawing.  That is a fair question, but so is the following.  With a sight radius around 3" and and barrel lengh barely over half that, who wants to forego the option to pre-cock that hammer and have a feather-light, super-crisp trigger pull? 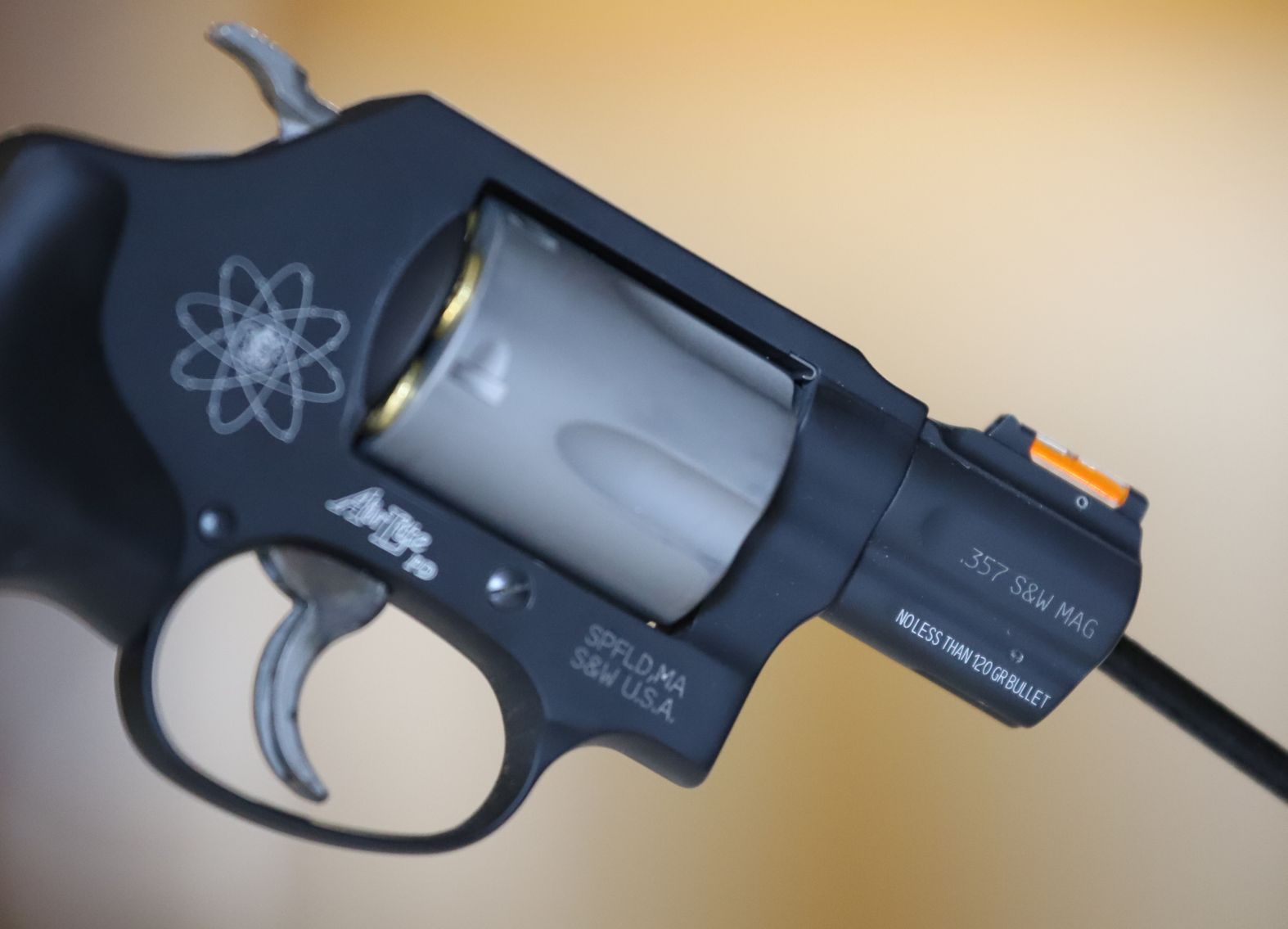 It's a cowboy gun for the 21st Century.  Full-size semi-autos have long replaced the long-barrel wheel guns of the old west.  But when it comes to backup and concealment, the wheel-gun is alive and well.  The 360PD buyer is someone who doesn't conform to every trend just because the crowd is doing it, and someone who wants something special, even if it costs a little more.  Nobody buys a 360PD because they need one.  Anyone can save some money and carry around some extra weight.  Heck, most snub nose revolvers even hold an extra round, giving you 6 instead of 5.  People buy the 360PD because they want one, often after they've handled one.  A pocket .380 is cheaper and has a narrower profile.  But a pocket .380 feels like a pocket .380.  The 360PD combines modern materials science with a powerful round developed during prohibition, culminating in a very unique and satisfying shooting experience.

As for the size, it is barely larger than my Samsung S8 which by comparison weighs in a bit under 7 ounces, and holds exactly zero rounds of .357.

Due to many factors, including an increase in the cost of raw materials, inflation, and probably some others, the advertised price of the 360PD has crept over $1,000.  It is hardly a budget-backup gun, but it is one of lightest and most reliable powerhouses you can possibly have.  The budget-conscious buyer can shop for a used one.  Currently used prices seem to be in the $700 to $800 range.

S&W introduced a "PD" revolver as a prototype at the NRA show in 2000.  Then the 360PD was put into production in January 2002.  In 16 years, no one has bested S&W in the area of making the lightest, smallest, and simplest .357 revolver.  It may be because few have tried probably because the R&D costs and the material costs would be daunting.  Even if someone shaved a few ounces off of the weight and smoothed the edges, they'd never sell enough of them to turn a profit, because for 16 years, everyone who has wanted a super light revolver with a titanium cylinder has probably purchased one.

You can put it in any J-frame holster you have in your collection, or even "gasp" put it in your pocket if you are so bold.  You'll barely notice the weight, but you will have 5 rounds of extremely reliable firepower at your disposal.

There is no doubt that the 360PD was not designed, nor is it wise for use, as a primary duty firearm.  Trust me though, you still want one.


Cymanca commented on 11/17/2018 4:09 AM
Have had one for 6 months and I love to carry this gun. In the hot desert Southwest everything pulls and drags on my tees and running shorts but this lightweight screaming meemee. But you do pay the price with a numb hand after going through a few cylinders of 357
Latest Video