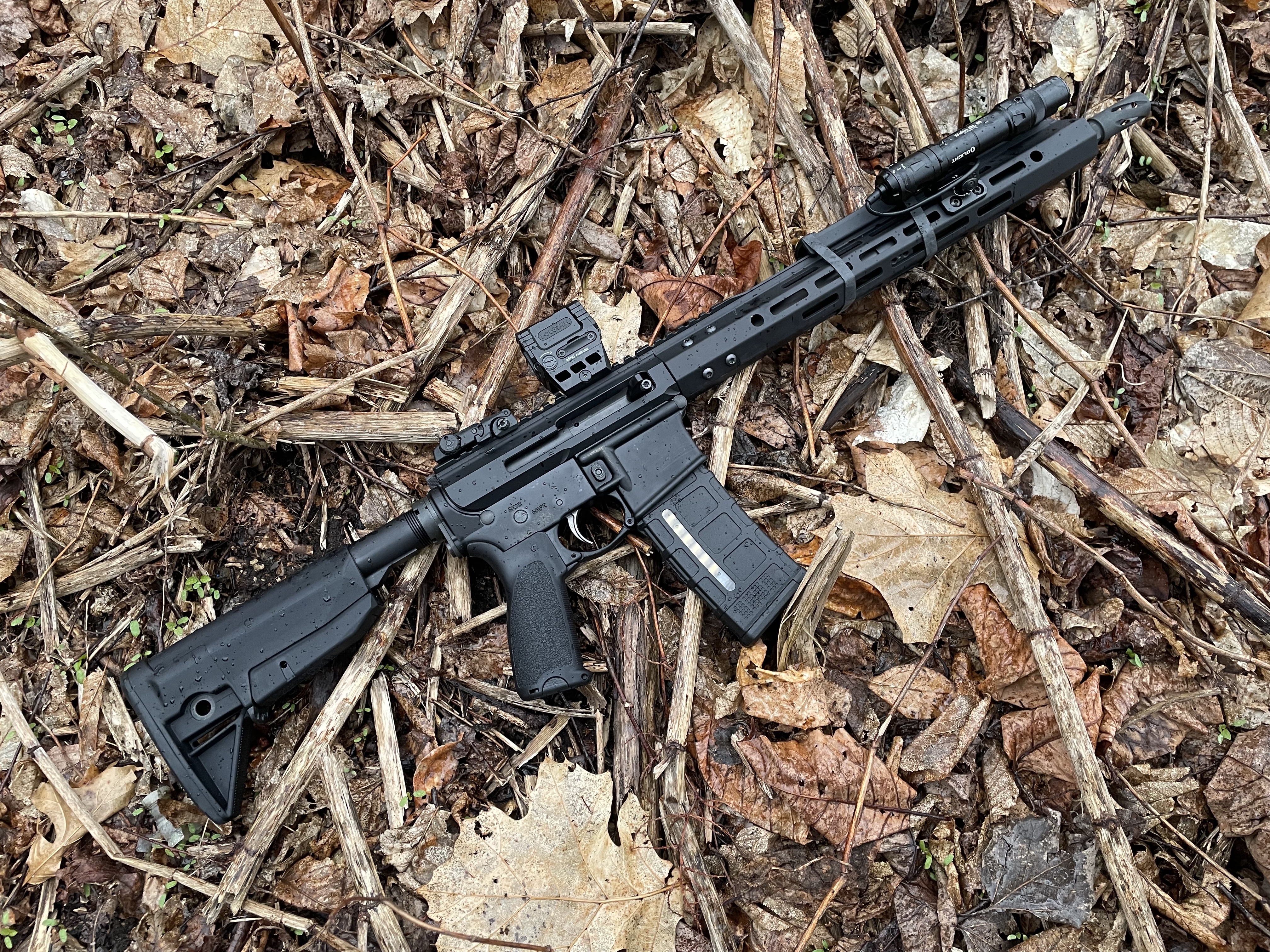 The AR-15 is without question the single most popular sporting rifle in the United States today. It stands head and shoulders above any other weapon.  In addition to being one of the most prolific weapons in the world, throw a stone at a gun store and odds are whoever it hits will have one.  Throw a hundred stones and you’ll hit 95 people that own at least one AR-15 weapon platform.  And while I don’t recommend throwing stones at people, I do recommend every gun owner have one.  This popularity is spurred on by a few different factors, the modularity means you’re unlikely to see two people with identical rifles, it’s a bit like an adult erector set. The design also puts the recoil of the action directly in line with the bore, making it silly easy to stay on target.  And with the US military employing the AR pattern since the Vietnam war, there is no shortage of parts, magazines or ammunition…..when there’s not a global pandemic raging of course.  Today It’s easier to list the companies that don’t make an AR15 pattern rifle than those that do.  So, in this flood of components and complete weapons, you really have to do something unique to stand out among the crowd.  Bear Creak Arsenal has cranked it up a notch with their new GPX upper receiver. 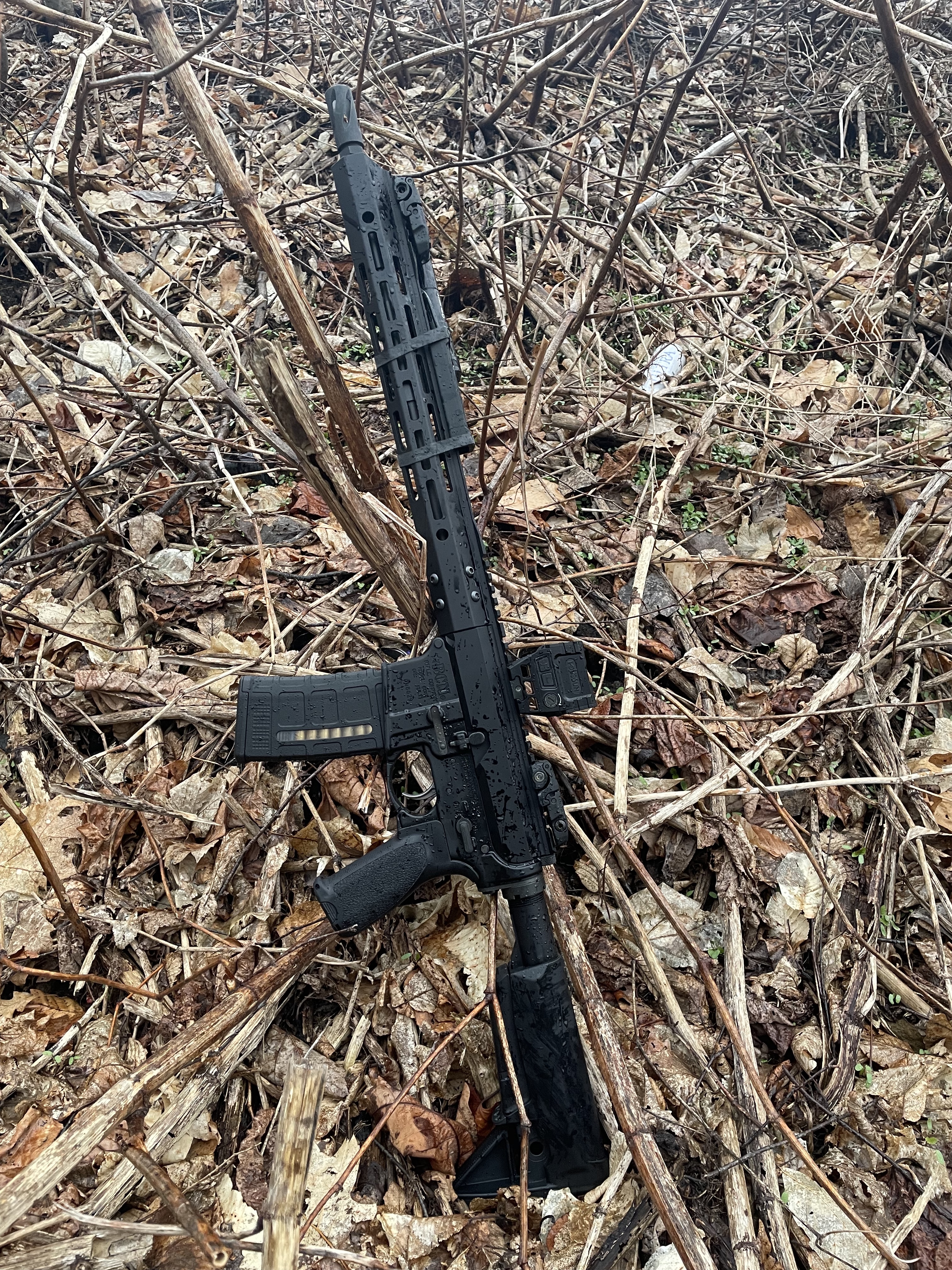 Bear Creek Arsenal makes a selection of AR components that rivals other major manufacturers in terms of variety.  One of these products stands almost unchallenged in the vast sea of the AR15. Bear Creek is one of the only companies that produces a Side Charging AR15 upper receiver. Which does away with the brass deflector, forward assist, and rear charging handle, all replaced by a charging handle attached directly to the bolt carrier. This design is highly intuitive, and certainly bears a resemblance to the mighty Kalashnikov in terms of user operation. The GPX adds another AK like feature to its list of accolades, Adjustable Piston Operation. The GPX is the first piston driven side-charging AR15 upper to come to market. 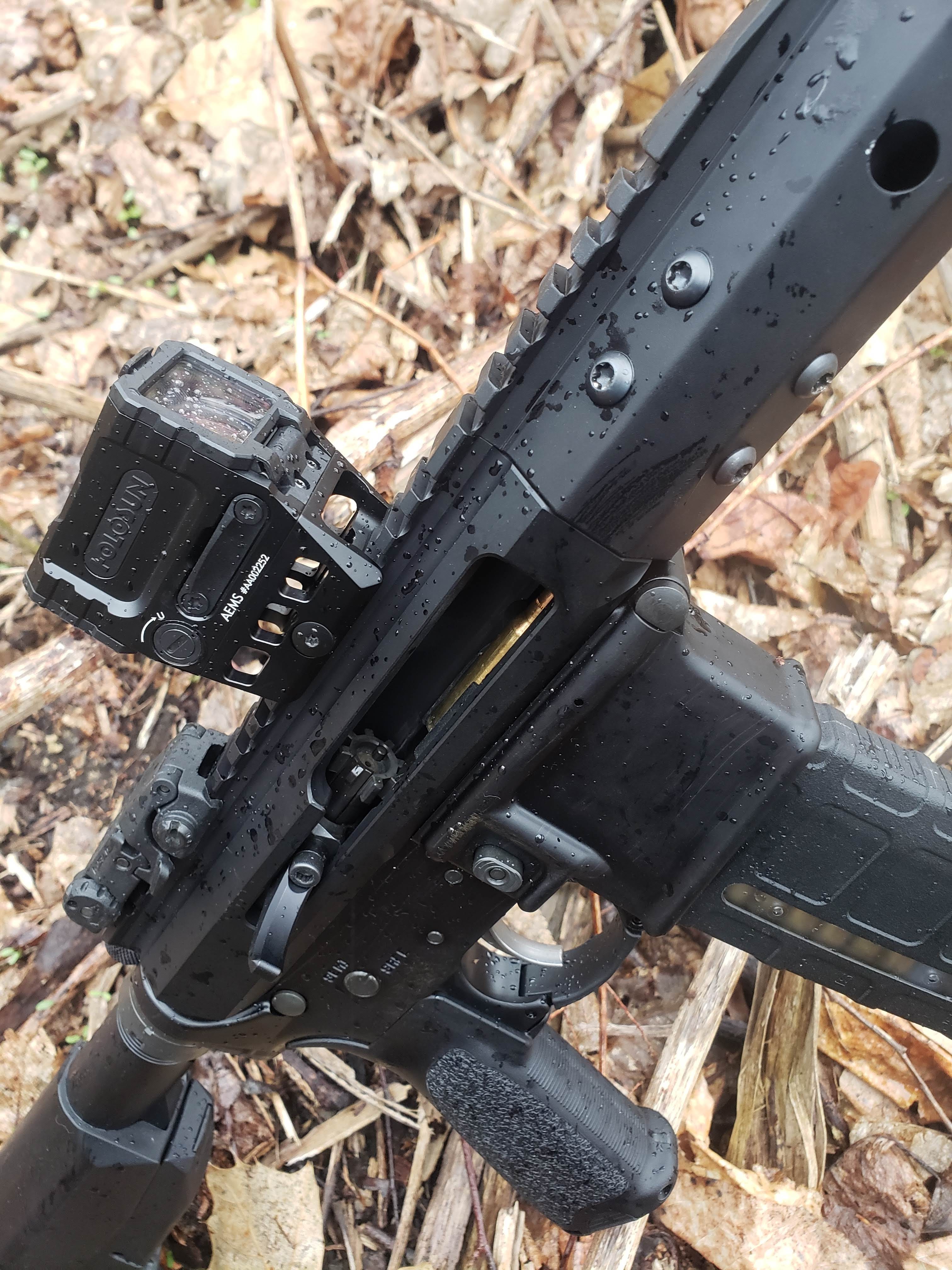 So, why is this anything to shout about? The intuitive nature of having one control for three functions is a good start. Aside from the obvious simplicity of operation, it also shaves weight off of the upper, which offsets the added weight of the gas piston system. That piston system also helps the rifle to run much cleaner than typical direct impingement systems, as well as cooler, as the hot gas no longer directly enters the receiver in order to make the thing function. Piston AR’s normally trade heavier weight for cleaner and more efficient operation. But in the case of the GPX, the extra weight isn’t there.  Our upper is chambered in .223 Wylde, with a 16” barrel using a 1:8 twist meaning it should do well with both 55gr and 62gr 5.56mm loadings as well as most common .223 loads. Moving forward, the gas piston system is adjustable, making it a perfect candidate to run suppressed.  It also comes with a 15” MLOK handguard with 7 sides for attachment, 4 QD sling mount points, and a shaved top section to ditch even more precious ounces. Even when we threw some gear we had in the office on the rifle and loaded it up with a full magazine, we had to keep reminding ourselves that this is a piston upper and not a DI gun, it really is that light.

Now that we’ve got all of the mechanical and aesthetic accolades covered, lets get to the meat of the subject. With all of these accolades going for it, do they all come together to make a good shooter? We added some MBUS irons, a Holosun AEMS optic, a handstop, and an Olight for good measure and headed to the range. 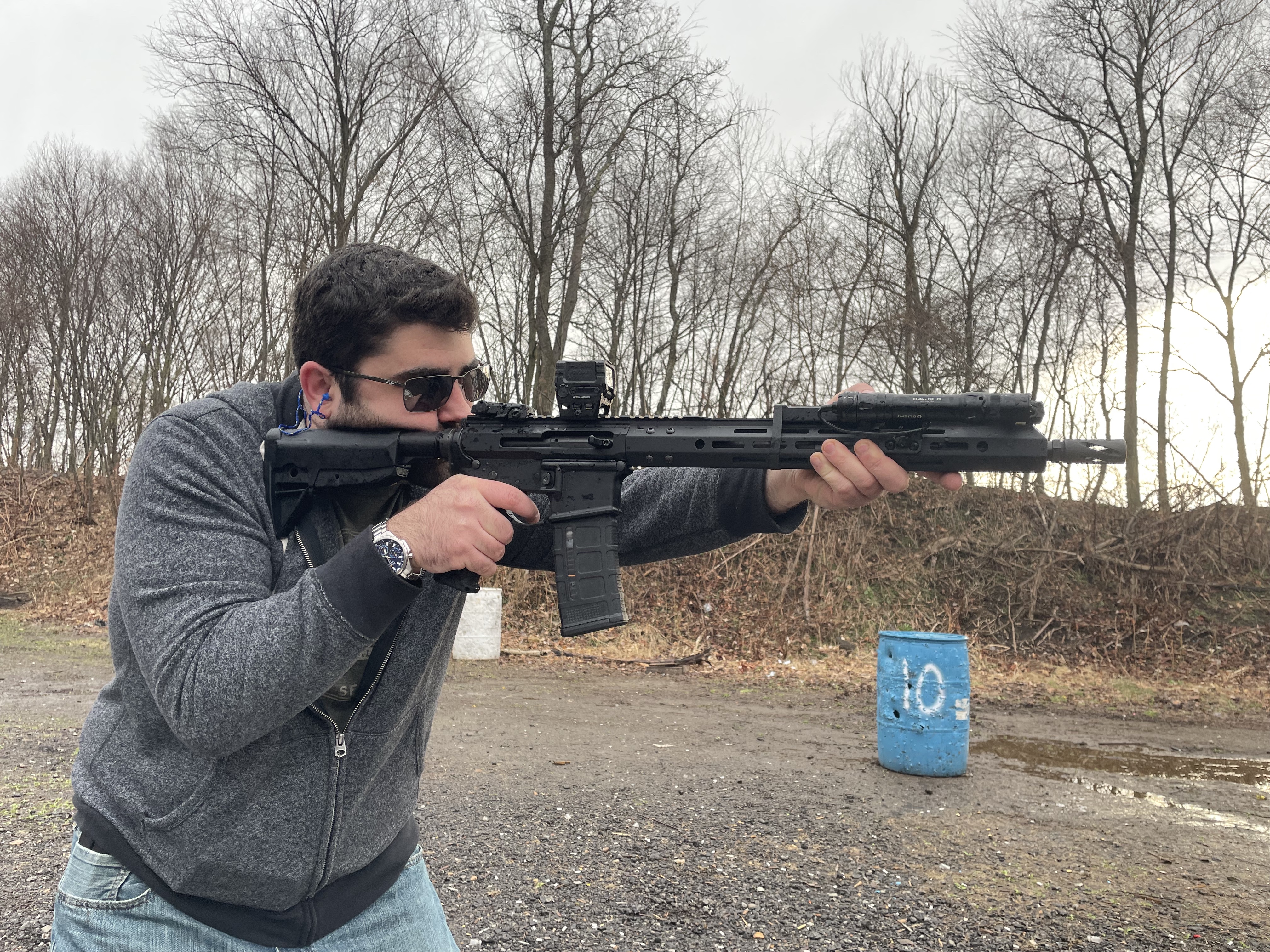 Admittedly, this would be the first time I’ve shot more than 10 rounds through a rifle since the Governor of our wonderful state said stay in your house for two weeks.  Between the ammo prices and availability, it just wasn’t there for me.  However, the rifle did perform with exceptional accuracy for the price point.  The rounds went where I put them with our 1x test optic, and the reason a target isn’t posted is due to my own need to shake the rust off at 100yds.  However, do not let the lack of target posted dissuade you from this upper.  We fed it a mix of 55 and 62gr and it did produce as near as makes no difference equal groups with both loadings.  But, what really surprised us was the utter reliability.  Once we were done with accuracy testing, we decided to see just how well it would run.  So, we fed it a diet of about 300 rounds of 55gr Wolf steel case ammo just to stack the odds against it.  Wouldn’t you know it ate every single round, burped, and asked for more.  And this is not post break in period, this is directly out of the box.  No cleaning, no babying, nothing.  We sighted it in, tested for accuracy, and tossed it out of the frying pan and into the fire.  What we got was a 100% reliable result, which left us without any further words to think of.  This thing will take the beating right out of the box.

What we have here in our hands is perhaps a game changer. It’s the first of its kind, it’s much more accurate than I am, it eats whatever is on the menu, and it’s posed to be more than affordable. What is not to like? Well if we were forced, there are two things. The first is that the adjustable gas system is not easy to access. I’d need a screwdriver over 12” long to switch the gas setting, or I’d have to remove the handguard. Given how well it comes adjusted from the factory, I wasn’t terribly worried about it. Secondly, in our testing the bolt did not lock back on the last round when using our Thermold 20 round magazine. We are chalking this up to the magazine as it locked open with every other magazine we tried, making it really a moot point. 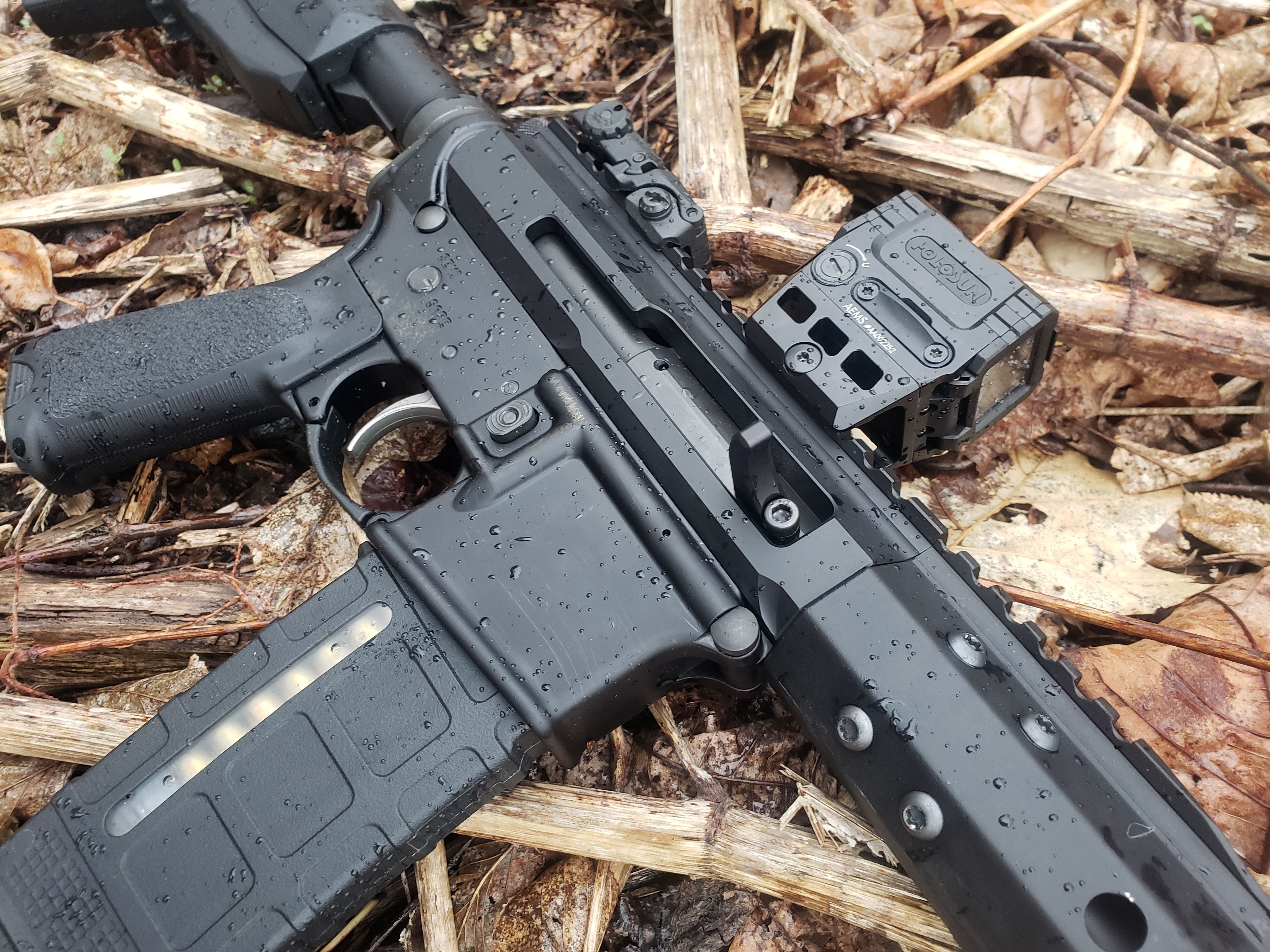 The Bear Creek Arsenal GPX upper is one hell of a product. It has so many accolades to it that I’m not sure I can think of a reason not to have one. It shoots soft, it’s accurate, it’s dead reliable, it's light, and it’s easy to kit out however you prefer to have it. The gas system being not the easiest to adjust is not something we lost any sleep over, and it did not affect our testing in any way. We will definitely recommend it to anyone looking for an upper that’s a bit different, and you can find yours at https://www.bearcreekarsenal.com/


EchoFiveCharlie commented on 12/23/2022 10:59 AM
Not sure why this is on the front page of Armslist, seeing as Bear Creek no longer makes this product. Pretty useless review, Armslist.
dcagle commented on 11/4/2022 8:05 PM
Rosa2471 commented on 9/6/2022 10:28 AM
Bear Creek Arsenal GPx available. 8305072385
Dspartan commented on 8/15/2022 7:57 PM
Picture you in a shtf moment and you snap a bolt which is one of the most common failures of the AR platform or you happen to get mud in the chamber area?? Answers: #1 gonna have to use the rifle as a bat because you won't be able to perform field service to it as well due to an almost non removeable side charge and answer #2 The original design of the D I firearm gases the upper receiver aiding in clearing foreign objects from upper receiver there has been loads of testing done with firearms like the AK and one of it's many fails is the mud test as well as the snow test any chamber blockage renders the firearm useless however another huge benefit of the D I system besides gasing the upper receiver is field serviceable from the carrier to pretty much the entire firearm if you have a 5.56 round you can just about do all you need to do to get it back into the shtf moment but each to their own
jimcarmstrong@gmail.com commented on 7/25/2022 9:18 AM
Where do I get one?
Jeffrey Craft commented on 5/9/2022 2:42 PM
Latest Video