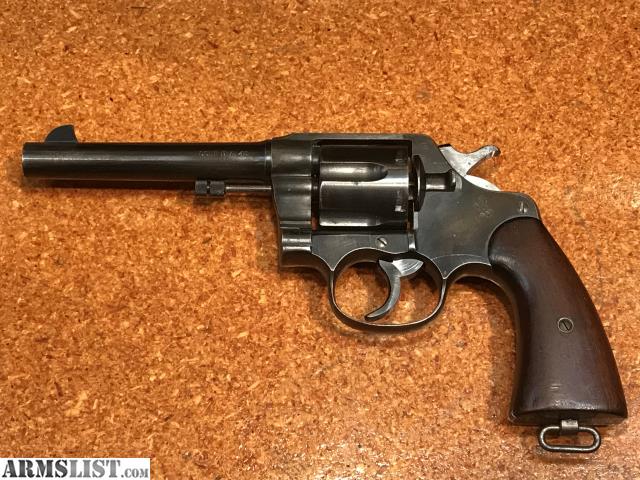 From my personal collection. This beautiful revolver was both a piece of history and an efficient weapon. It requires moon clips for the 45 ACP. It would be a meaningful addition to any collection and a great conversation piece.

This is the information I recieved from the previous owner many years ago.


Colt Model 1917 US Army Revolver .45 ACP. Serial # 1817xx, shows made in 1919. This is a super tight and nice WWI US double action Army Model 1917 the first time, that a Colt collector see’s this gun, it will take their breath away. Chambered for .45 acp (uses full and ½ moon clips). The pistol is correctly marked “UNITED STATES PROPERTY” on the bottom of the barrel and “US Army Model 1917 “ on the butt. The butt also retains the original lanyard loop. The pistol has a brushed blued finish, which is correct for a original 1917, a 5 ½” barrel, and the correct un-marked wooden grips, with the serial number penciled on the back of them, but they do have a few very small handling marks. The pistol has no holster wear, almost no wear for a military gun, it must have set in the gun vault, all of its life. It does appear that it has NEVER been back to arsenal for a re-do, as the Rampant Colt and the military inspector’s markings are very sharp and I don't see a buggered screw anywhere on this gun. We rate the current finish at 97+%, does have a bit of blue turning to patina on the grip frame. The original grips are in really nice condition with only minor wear and marks as described above, rated at 95%. The bore is shiny with strong rifling and a small amount of pitting or frosting. This is a good representative example of a WWI Colt Model 1917, and it will fill a nice spot in your collection and everybody that see's this gun, will wonder how it survived for 93 years. We don’t have a holster but do have 6 half moon clips. This gun came out of the 84 year old Gunsmith’s estate, please check out the other great guns I have on Gunbroker. . I have a few more high resolution pictures available, just email me at (REDACTED) or if you would like any pictures of other area’s, just email me.

Found some new information about the previous owner today. This revolver belonged to a CAPT Earl Wood U.S. Army Joined in 1919 and got to Acting Major before retiring sometime in the late 1920's. Born 1889 and passed in 1951.