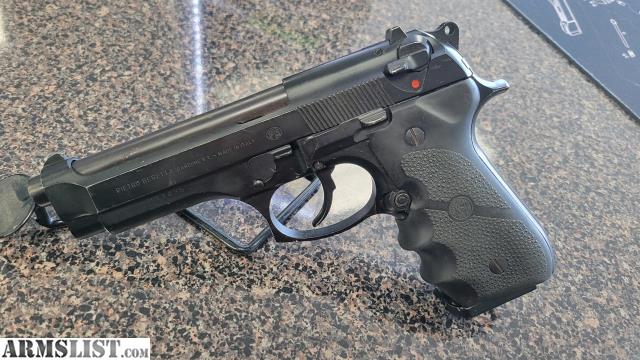 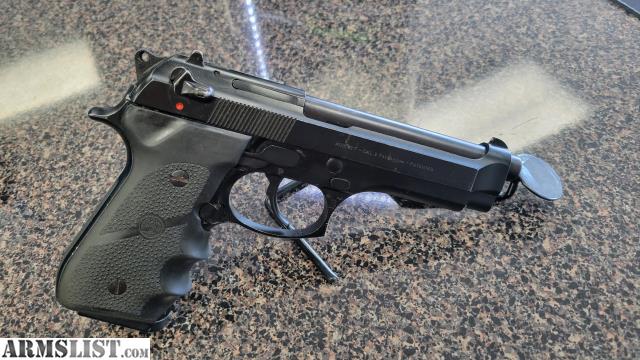 ***USED***
For most of the 20th century, the service pistol of the US Armed Forces was the Colt 1911 .45ACP. It served admirably throughout WWI, WWII, Korea, Vietnam and a host of smaller conflicts. However, in the late 1970s, increasing pressure from NATO countries to standardize on the 9MM Parabellum (9x19), and the fact that 1911 inventories were worn out, saw the US military searching for a modern day replacement for the old war horse.

Some of the requirements for the new service pistol included that it be chambered for the 9MM Parabellum; be double action for the first shot and single action for the following shots; be equipped with a hammer drop safety and hold 15 rounds in its magazine. The new pistol also had to be manufactured in the USA.

Several companies submitted entries for the field trials, including Smith and Wesson, Sig Sauer, Heckler and Koch, Colt and Beretta. The foreign manufacturers had agreed to build manufacturing facilities in the USA, should their entry be selected. The trials lasted for over a year and in the end, the Beretta 92F (M9) was chosen. Smith and Wesson and Sig Sauer both contested this decision, but in the end, Beretta remained the victor. A side benefit from this was increased sales to the law enforcement community. As a side note, subsequent purchases of Sig Sauer P228s (M11) for Army CID use have been made.

The Beretta 92F borrows heavily from the Walther P38 design. This is evident in its open slide design, its double action trigger group, its use of a locking block assembly and its hammer drop safety. Because of its open slide design, the Beretta has earned a reputation for being very reliable. It also has an extremely fast lock time, which permits very fast follow up shots. Unfortunately, due to its lack of a barrel bushing, which is normally used to provide a solid lockup for the front of the barrel, the Beretta 92F can be stubborn in the accuracy department. However, due to the generous allowances for acceptable combat accuracy by the US military (groups of 5-inches @ 25 yards), the Beretta is deemed combat worthy, with most examples turning in sub 3-inch groups.

The Beretta 92F operates from a locked breech, with the locking block under the barrel mating with recesses machined into the sides of the slide. This leaves, what some feel, is an unacceptably small amount of metal in this critical area. Several slide failures have occurred. Most have been attributed to excessive use of high-pressure ammunition, far in excess of what the Beretta 92F was designed to handle. This design ‘flaw’ has been corrected in all current models. Improved models bear the 92FS designation.

The Army’s marksmanship unit (AMU) has gone to great lengths to accurize the Beretta 92F (M9) and has managed a high degree of success in doing so. Some of their improvements have even been incorporated in some of the latest variations of the Beretta 92FS, namely a front bushing to improve lockup and tighten groups.

One of the big selling points of the Beretta design is its ease of disassembly. After determining that the pistol is EMPTY, remove the magazine and allow the slide to go forward. DEPRESS the takedown button on the right side of the frame and at the SAME TIME, rotate the takedown latch on the left side. This will allow the slide to move forward off the frame. Holding the slide assembly UPSIDE DOWN, compress the recoil spring guide assembly, located beneath the barrel, and remove.

BRING IN CASH AND RECEIVE UP TO 12% OFF THE LISTED PRICE FROM OUR WEBSITE, WWW.HDFIREARM.COM!!!!
Average savings of 7%