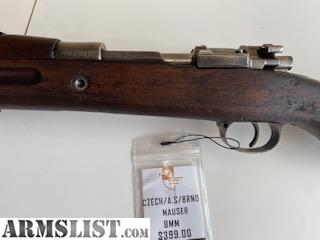 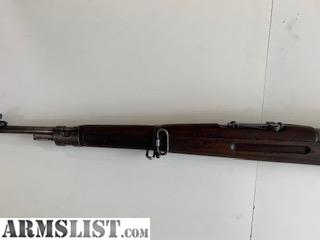 In on consignment is a used mauser chambered in 8mm. The consigner is asking $399.
*Bolt and receiver serial #s do not match*

The vz. 24 rifle is a bolt-action carbine designed and produced in Czechoslovakia from 1924 to 1942. It was developed from the German Mauser Gewehr 98 line, and features a very similar bolt design. The rifle was designed in Czechoslovakia shortly after World War I, to replace the Vz. 98/22, also a Czech-designed derivative of the Gewehr 98. The vz. 24 featured a 590 mm (23.2 in) barrel which was shorter and considered more handy than the 740 mm (29.1 in) Gewehr 98 barrel. The vz. 24 was chambered in 7.92×57mm Mauser like its predecessors.

Throughout the late 1920s and into the 1930s, Czechoslovakia exported hundreds of thousands of vz. 24 rifles to various countries across the globe, with variants chambered in the original 7.92×57mm Mauser, 7×57mm Mauser, and 7.65×53mm Argentine. These included contracts for several South American countries, most of which were 7 mm or 7.65 mm guns. Around 40,000 rifles were sent to Spanish Republican forces during the Spanish Civil War. Nearly 200,000 rifles were purchased by China, seeing action in the Second Sino-Japanese War, which became part of World War II. Iran purchased vz. 24 rifles, along with two other variants, through the late 1920s and 1930s, and later produced their own copies in the late 1940s.

Germany acquired hundreds of thousands of the rifles in 1939 when they occupied Czechoslovakia and pressed them into service under the designation "Gewehr 24(t)"; during the occupation, production of the rifles continued until 1942, when the factories were converted to the German-designed Karabiner 98k. During this period, several hundred thousand rifles were also built for the Romanian Army. Vz. 24 rifles saw extensive service during World War II in multiple theaters, predominantly with the German and Romanian armies on the Eastern Front. Lithuanian vz. 24s, which had been captured during the German invasion in 1941, were later seized by Soviet forces, who in turn used them to arm the Viet Cong during the Vietnam War in the 1960s.

*COVID19 Update: We are still open for our regular business hours, but due to a high volume of sales combined with shipping limitations and backlogs we are currently unable to process any shipments and any listings are for local pickup only. Once we are able to ship again this notice will disappear, until then we are unable to - we apologize for the inconvenience and appreciate our customer's understanding during this unique time period*

Shipping & Pictures*Please Read!*:
*We are currently not processing shipments - between the high volume of customers already in and out of the shop combined with how COVID has affected shipping services we do not have the extra manpower/cannot risk the liability of shipments being lost or damaged. Once the world returns to normal we will resume our usual shipping services, as listed below.*
We can always take photos of a firearm and ship to an FFL provided the firearm is legal in your state, to get a quote or request photos please EMAIL us the name and full address for you receiving FFL. We only have one phone line and it is almost always busy so emails are much easier for our staff to respond to.
Due to a high volume of inquiries and an already busy workload at the store it may take us up to 48 hours to get detailed photos out and we appreciate your patience.
Please note taking photographs of firearms and boxing them up for shipping quotes takes up significant company time and resources, due to an influx of customers requesting pictures and quotes then dropping off the map we have to request that you only ask for pictures and a shipping quote if you are seriously interested in purchasing the firearm.
Please note however that due to California's DOJ's extra rules and regulations we cannot ship any firearms to California.

Trade Ins:
We'll always consider a trade in on a firearm however we have to see the firearm in person at our storefront in Beaverton, OR in order to make an offer. The only exception is that we cannot accept trade ins towards a consignment firearm.