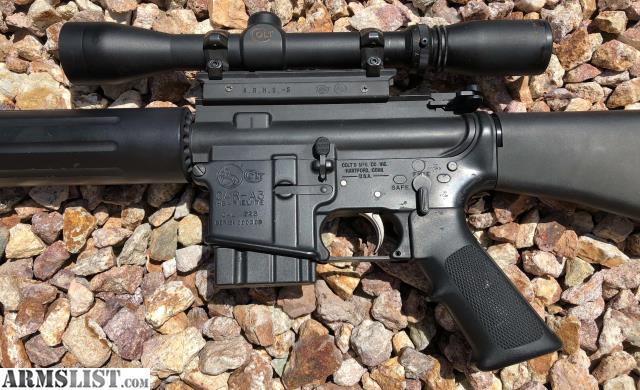 Original owner, this rifle is new and unfired, but has some light cosmetic/finish issues. Two are on the RHS side of the magwell area, and look to be light blems. The others on the receiver and one on the barrel, I’d classify as “safe rash”. Original box, manual, CAR-match rifle instruction sheet, Colt letter of authenticity, and 3 mags original to this era of rifle.

Also included is the original low-profile, Colt-branded A.R.M.S. scope mount, and a very rare Colt 3-9x40 USA-made scope. These were reportedly made by Leupold for Colt; and it’s a quality, American-made scope with its own serial number. These scopes are super-scarce and no longer in production, and there’s never been a lot of information available on them. That makes it very hard to place a value on it, but it’s fair to say at auction it could bring a lot more than the included asking price here.

With the cosmetic issues noted above it’s probably not going to be a dust collector, but ready to be taken into the field and used.

Asking price in cash for local pickup; no trades needed. If the ad is up, this item is still available...thx. Will ship this firearm! Have feedback/references available for review.