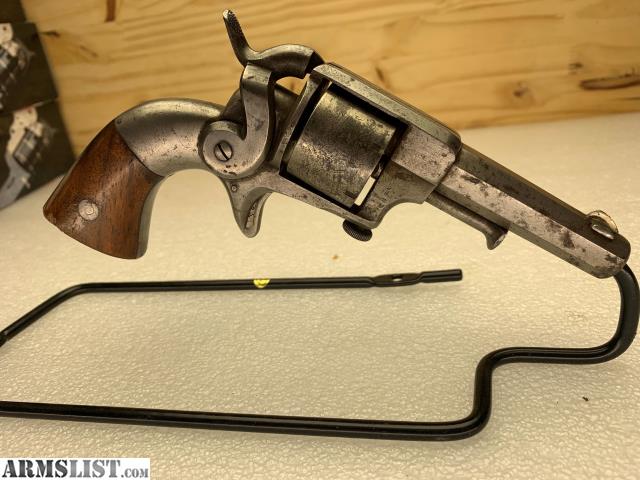 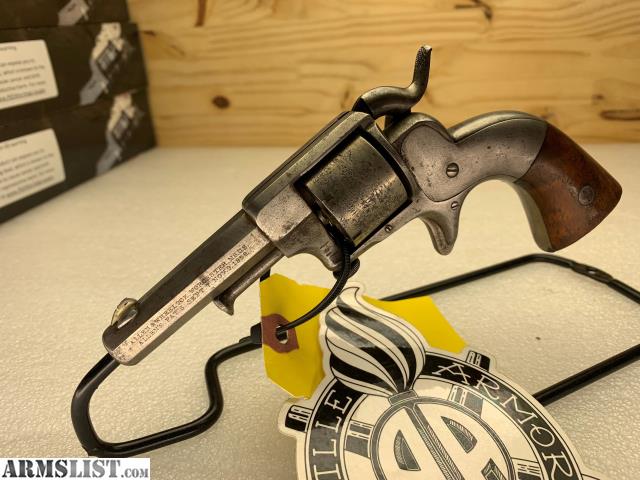 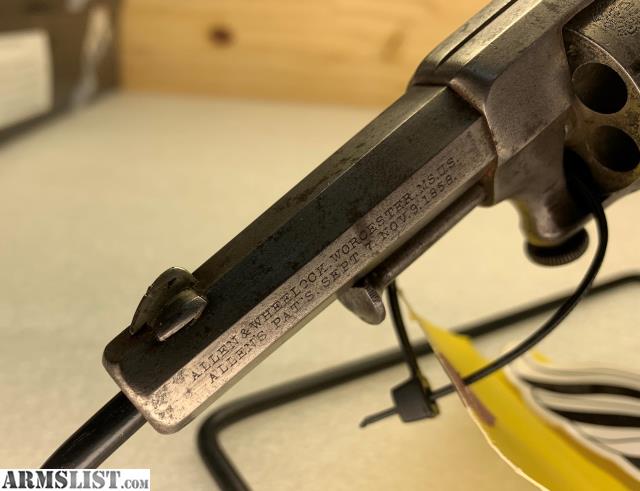 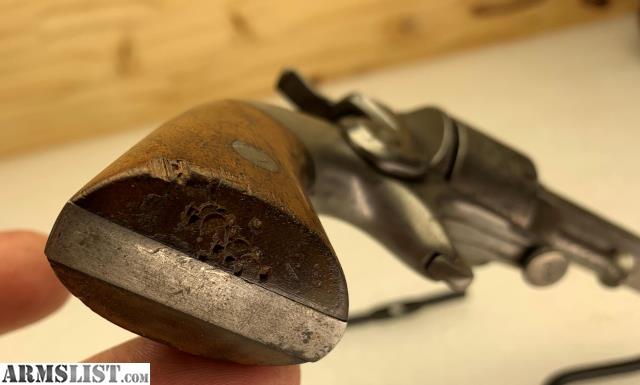 The firm of Allen & Wheelock was a true powerhouse of American arms manufacturing during the middle of the 19th century. Unlike the major American arms producers of the era like Colt and Remington, Allen & Wheelock concentrated upon manufacturing arms for civilian sale rather than focusing on trying to obtain government military contracts. The company was founded in 1831 when Ethan Allen started to make cutlery in Milford, MA. Allen’s primary line was the knives and tools needed for cobblers. Allen then moved his small facility to North Grafton MA where he added a cane gun to his line of shoemaker’s tools. In 1836 Allen introduced his “Pocket Rifle”, a single action, under hammer, long barreled rifled pistol in .31 caliber. With the initial success of this product, Allen pursued the design and patent of a double action pocket pistol, and eventually the pepperboxes that would be his mainstay product line for the next 20 years. In 1837 he brought his brother-in-law Charles Thurber into the business, creating Allen & Thurber, and in 1842 the company moved to Norwich, CT, where it would remain until 1847. In 1847 The firm moved to Worcester, MA were it would remain until it went out of business in 1871. In 1854 Thomas Wheelock, another of Allen’s brother’s-in-law joined the company, and it was rebranded as Allen, Thurber & Company. In 1856 Charles Thurber retired, and the company known as Allen & Wheelock came into existence. In 1865, after Wheelock’s death the previous year, the company was renamed for the last time E. Allen & Company. The new company included more of Allen’s extended family, his son’s-in-law Sullivan Forehand and Henry Wadsworth. After Allen’s death in 1871, the 34-year-old company would change names again, this time to Forehand & Wadsworth, and the Allen name would be left to history. During that 34-year history, the company produced thousands of firearms ranging from single shot percussion pocket pistols and multi-barrel percussion pepperboxes, to rather innovative and complicated large frame percussion revolvers and even some of the first truly successful cartridge revolvers. The development of Allen’s “Lip Fire” self contained cartridges were truly revolutionary, especially because the rimfire cartridges of the era that were offered in the Smith & Wesson #1 and #2 revolvers were only .22 and .32 respectively, while Allen offered self-contained handgun cartridges in the much larger calibers of .36 and .44. Unfortunately Allen’s production of his Lip Fire and Rim Fire series of revolvers was brought to a screeching halt due to litigation from Smith & Wesson, who were defending the bored through cylinder patent of Rollin White, which they had purchased exclusive access to. He managed to produce his sidehammer rimfire revolvers for about 3 years, from 1859 to 1862, before the patent infringement suit shut down production. His revolutionary Lip Fire revolvers saw a much shorter production life, with the guns being patented in 1860 and being out of production by mid-1862. Despite these setbacks Allen persevered, continuing to manufacture percussion revolvers, and long arms, including a drop-breech cartridge rifle and double-barreled shotguns with metal wrists. Allen also produced a successful line of single shot, cartridge derringers that did not infringe upon the Rollin White patent. Allen’s innovations in revolver actions, and self-contained cartridge designs earned him numerous patents. His use of large-scale production techniques and interchangeable parts also made his a leader within his industry. While certainly not as famous as Samuel Colt, Eliphalet Remington or Oliver Winchester, the contributions of Ethan Allen to the American firearms industry were important and long lasting, and his high quality arms offer a worthy and wide array of collecting possibilities.

Offered here is a GOOD condition example of an Allen & Wheelock Sidehammer .32 Rimfire revolver. Allen produced about 1,000 of these attractive little pocket revolvers from 1859 to 1862. Several different minor variations are noted during the course of production, based upon the method of securing the cylinder pin, minor changes to the frame shape and hammer shape and a change in grip angle at the end of production. In the broadest sense there are three models, with sub-variations and transitional variants noted. All of the guns were single action revolvers with a side-mounted hammer (as the name implied), a spur trigger and with octagonal barrels that typically varied between 2 7/8” and 5” in length. Like most Allen arms, they were batch (assembly) numbered, not really serial numbered, thus existing numbers give little indication as to quantity made, and low numbers occur regularly, sometimes even being duplicated. This particular example is a “2nd Model”, and the inclusion of the July 3, 1860 patent date on the left side of the frame, forward of the cylinder indicates that the gun was produced after that point in time. The iron-framed revolvers were blued, with case hardened hammers. Some sources indicate that the cylinders were case hardened as well, but I have not seen evidence of this and the few high condition Allen’s encountered have blued cylinders. Like most Allen handguns, the lovely high luster blued finish was quite fragile, and tended to flake easily, making any Allen with a significant amount of original blue a true rarity for the collector. This example has a 4” octagonal barrel and retains a large amount of original blue. The gun is assembly numbered throughout, and the number appears on bottom of the barrel (concealed by the cylinder pin), on the cylinder arbor pin, on the rear of the cylinder, on the right side of the frame under the grips and stamped inside both grips. The left side of the barrel is stamped in two lines: ALLEN & WHEELOCK WORCESTER. MS. U.S. / ALLEN’s PAT’s. SEPT. 7 . NOV. 9. 1858. The left side of the frame is stamped, between the barrel and cylinder, JULY 3, 1860, although this is a little harder to read due to some erosion and etching of the metal from the caustic gas flash that escaped from the cylinder gap. The 4” octagon barrel retains about 50%+ original high-luster blue, which has faded and worn some and has dulled slightly as well. The actual blue present on the barrel, including the faded and dulled finish is probably more like 70%+ and in person (and not under the bright photographic lights) the gun appears to have even more finish. The frame has a mostly mottled brownish patina over a base gray color, with about 10% original bright blue present, mostly on the frame under the hammer and in the protected areas at the rear of the frame. The cylinder has a mostly muted brown patina with traces of original blue flecked and blended over all of its surfaces. The case hardened hammer retains about 30%+ coloring, with the balance having faded to a muted mixture of gray and brown tones. Most of the vivid color remaining is on the reverse of the hammer. The frame shows some lightly scattered pinpricking and some freckled areas of light surface oxidation but remains mostly smooth with good edges. The octagon barrel is essentially pit free with crisp edges and FINE, bright bore with strong rifling. The action of the revolver mechanically EXCELLENT and the revolver times, indexes, locks up and functions perfectly. The original brass blade front sight is in the dovetail at the end of the barrel and has a lovely, untouched golden mustard patina. The two-piece walnut grips are in GOOD condition as well, and retain the majority of their original varnished finish. About 85%+ of that varnish is present, with most of the wear along the high edges at the bottom of the grips. The grips are solid and complete and free of any breaks, cracks or repairs. The grips do show some minor handling marks and surface mars, with the bottom of the grips showing the scattered impact marks that are found on nearly every 19th century revolver. Other than the high-edge wear noted on the grips, they are in really wonderful condition.

Overall this is a really wonderful example of the Allen & Wheelock Sidehammer .32 Rimfire. With a rather limited production run over about 2 years, these pistols are not that commonly encountered. Due to the flaking problem with Allen finishes, one with this much original finish is a real rarity. This would be a wonderful addition to any collection of Allen & Wheelock revolvers, early cartridge revolvers, Civil War era revolvers or simply high condition antique American handguns. You may be able to find a gray or brown one of these for sale somewhere, but I challenge you to find one this nice and this reasonably priced anywhere. This is a whole of quality and condition for less than $1,000, for a gun over 150 years old!

MORE PICTURES OF ANY ITEM UPON REQUEST.

We are actively seeking firearms for consignment from single pieces to entire collections. We handle all marketing, advertising, collection of payment, shipping and FFL paperwork. We have extensive experience selling all makes and models. Let us do all the work! Contact us today at 828-367-2755.

If not specified in the listing or negotiated in advance, buyer pays actual shipping plus insurance to anywhere in the continental U.S.

WE DO NOT CURRENTLY SHIP AMMUNITION

Looking for something, but don't see it listed? Ask us if we can get it!

We are a factory-licensed and insured Cerakote applicator.

WE BUY & CONSIGN FIREARMS. Ask us about our 30 day program.

We offer the BEST prices on FFL transfers in town:

Veteran/EMT/LEO discounts on all items in shop.

3% surcharge for CC call in, ship to your FFL gun purchases.

We are the BEST core gun shop in town.