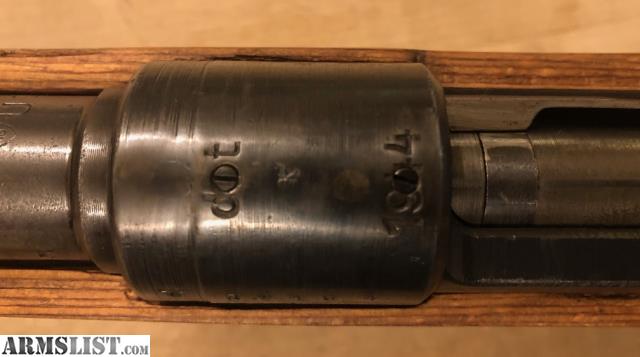 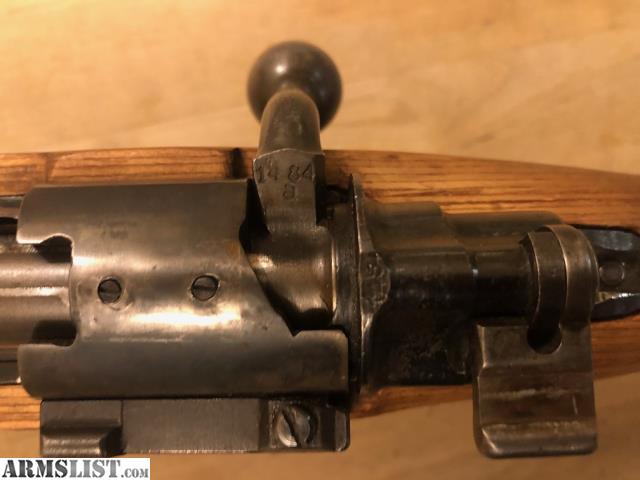 For sale German WWII k98 rifle marked “dot 1944” manufactured January 1945 at the BRNO factory, Waffenwerke Brunn. AG Brunn, making it an “a” series Semi Kriegsmodell with matched bolt and receiver, there are no import markings on this rifle. There is no serial number on the barrel or any of the metal parts which was common and correct for weapons made this late in the war. Bore is excellent, shiny with good rifling. The only mismatched number I could find on the rifle is the handguard, which has a different number than the SN stamped in it. The stock is a very nice looking Semi Kriegsmodell with no provision for a bayonet, or cleaning rod, front bands and plate are all held on with screws. There is also a WWII era leather sling, it has the correct keeper, but does not have a leather slide, which was also common, late war. There are no import marks on this rifle, it is a true Vet bring back from WWII, it is NOT a Russian Capture (RC) or Yugo rifle. The only downside to this rifle is that a previous owner drilled out the receiver to install scope mounts, the holes have been filled in with small set screws. Had this not been done, this would be a $2500 - $3000 rifle in the condition it is in. Selling for $1,300.00, FTF Plano, Texas, only, cash only, no trades.
Private Party Details Registered on 9/26/2013 Listings by this user